If someone would have told me when I first started The Fat Foodie that last Friday would have happened, I’d have told them to sod off! Never in my mind did i think I’d ever be able to collaborate on one, let alone get my creation put on a menu. Im talking about a burger and not just any burger, The Fat Foodie x Libertine Burger – No.666

So let me take you back to our first encounter. It was a blazing hot sunny day mid June and the vides were high at the british street food awards in Digbeth. Upon arrival we knew that everyone’s games were going to be strong as everyone wanted to make a statement and win. First stop had to be Homeboys as they had octopus leg on the menu and that’s a right bit of me but as I was waiting, I noticed that Libertine Burger were doing two sliders. Beef and buttermilk fried chicken with their chilli cheese fries for £6.

Absolute bargain it was so ordered them as well, standard being the fat git I am. Did not realise how dam good they were going to be though. Lovely juicy patty, succulent chicken breast and if you’ve ever tried their homemade chilli you’ll know how good their fries are! So while sat there scoffing me grub, I noticed a gentlemen sat opposite with a box that had a Libertine burger sticker on top. Through further investigation I found out these were t-shirts’ with “VOTE LIBERTINE” on the front for special customers. Well I definitely wasn’t special but gift of the gab I managed to acquire one. T-shirt in hand I went off in to the night, the slightest bit intoxicated to say the least but hay who isn’t at ten o’clock on a Saturday night! After that weekend and now being Libertines number one fan, obviously fan girled it and turned the push notifications on, on the old insta. To find they’ll be doing Leamington Food Festival which after seeing this I most certainly was going to, rain or shine (turned out it did both)! I remember commenting on their post saying can’t wait to come see you guys again, to which they replied “I hope you’ll be wearing your hat”………..HAT? There were hats and I didn’t have one. Well this had to be sorted so turning up in my T-shirt I was greeted with a snapback which I wore with pride and also blessed with these……..

And the Libertine Chilli Cheese Fires 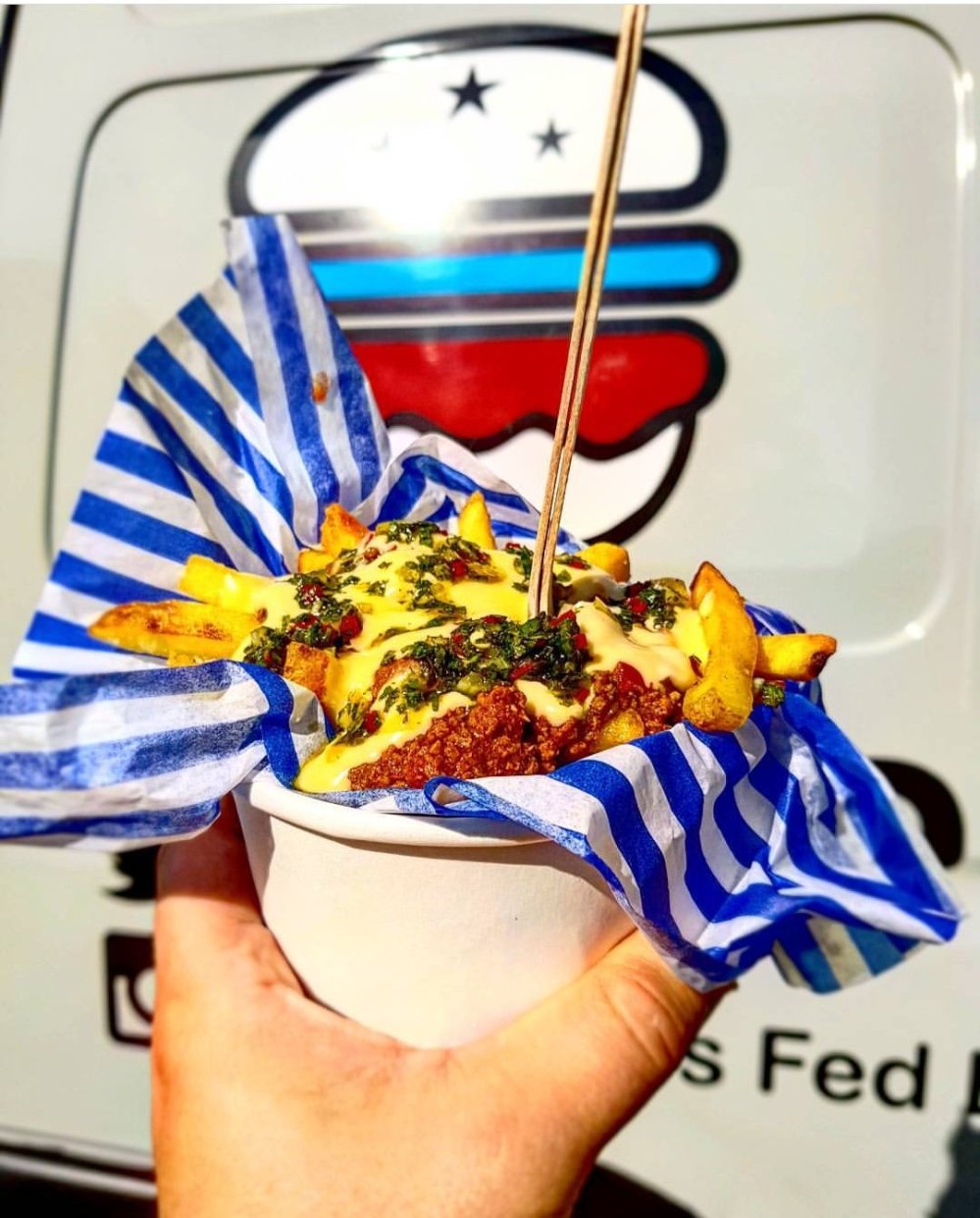 Basically everything I’d had at the Street Food Awards just bigger and better!

So to cut a not so long story short, after thanking them for my hat I said “All I need now is some Libertine pants. To which they responded with this………….. Yes that’s correct! The bloody hero’s made me some one of a kind Libertine Burger Pants 😂 Felt like their flaming mascot! And the fact that I actaully turned up to digbeth dining club wearing them over my jeans, to find them being filmed wasn’t embarrassing at all! All here for a laugh aren’t we ah! 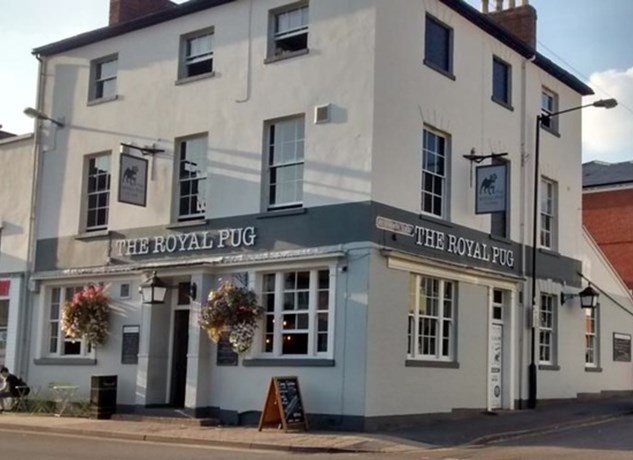 So the takeover! After staying in contact with Charles, the master behind Libertine. We spoke about doing a collaboration and a instagram take over but never thought anything would come of it as didn’t think my account was big enough to pull something like that. Anyway after seeing they were taking over The Royal Pug I messaged Charles saying congrats and I couldn’t wait as I thought I was originally going to miss it. Straight off he was like “colab, insta takeover”! I couldn’t believe it, The Fat Foodie designing a burger that was actually going to be put on a menu. Yes ok it was only for one night but still, absolutely buzzzzzzing I was haha! After a few convesations it was decided on “THE HOT ONE” and seeing as they number their burger I had to go for No.666! It would consist of Two Signature Beef Pattys, Chilli Infused American Cheese, Crispy Smokey Bacon, House Pickled Red Chillies, Pip’s La Boca del Diablo Hot Sauce, Lettuce, Mustard & Jalapeños.

So Friday arrived and there was so much buzz around the evening and finally seeing what the burger would look and taste like. Myself and Dan (Brumfoodie) headed down nice and early to help out with anything we could and to be the first to get a taste of the finish product. Five o’clock hit and boom our order went in. Sitting patiently, anticipating what would arrive in front of me and then it arrived. Just look at it please…

Not only did it look incredible but it tasted a million bucks as well! Was trying so hard not to blow my own trumpet all night but my god it was good. Even Dan didn’t want to tell how good he thought it was but the look on his face said it all.

With the acidity in pickling the red chillies taking a lot of the kick away and with the jalapeños and pips hot sauce just adding to the favours. Its was the perfect amount of heat to still be able to taste the amazing flavour of the beef pattys. And Charles home making the chilli infused american cheese, well I’d but that stuff but the bucket load!

So as the night went on The Royal Pug filled right up to the brim, with everyone loving the burgers and many a beer being drank. Being on Libertines instagram with the takeover just gave me more chances to go around, being nosey and getting as much feedback as possible. Especially for my own creation and its safe to say, it went down a storm. That well that at the end of the night while speaking to Charles, he dropped into conversation that he’d be keeping to on the menu for Digbeth Dining Club during december. As many of you know with DDC being my second home, in my head I was bouncing off the walls with excitement. Can’t wait to hear what you all think!

So on the 22nd of December Libertine will be back at Digbeth Dining Club and all their profits will be going to the charity Crisis. By selling burgers and fries, we can give someone who’s homeless all this for £26.08 at Christmas.

💥Hot, delicious, nutritious Christmas dinners for over 4,700 homeless people over nine days
💥Advice on housing, benefits, finances, employment, as well as legal matters
💥Healthcare, including TB and hepatitis screenings
Dental treatment and eye tests, including glasses
Hairdressing and massage treatments
💥Learning and skills opportunities, internet cafés and IT workshops
💥Specialist centres providing safe accommodation to rough sleepers, women and people with dependency issues
💥PLUS access to Crisis’ year-round services for training and support in the year ahead.

I feel like it’s a really good cause, especially at this time of year and if you don’t give something back then you don’t deserve to succeed! I’ll be there showing my support and buying the first burger!

Until next time peeps, go check out my instagram for more pictures and reviews